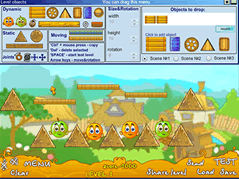 The developers of Cover Orange 2 and Cover Orange Level Editor along with BubbleBox.com are holding a contest for players to create their own levels, which may feature in the next Cover Orange game release.


The competition is now closed, winners are listed below. We'll post the winning levels here soon, they will also appear in the next Cover Orange game release.

RPG GAMES
GREAT GAMES!
I LIKE YOU, YOUR TURN

Enjoy some of these legendary BB games

Millions of people have played online games on Bubblebox, invite your friends and join in on the fun! Bubblebox started way back in the internets infancy, we know games! We host over 3,000+ games, the most popular of which nowadays are shooting, upgrades, simulator, ragdoll and .io games.
Recently the multiplayer io games genre has become hugely popular. Make sure you don't miss Slither.io, Wormax.io and Paper.io!

Since we've been around for many years traditionally popular categories like stickman games, RPG, physics and point and click games are packed with great classic titles and games series. Golden oldies which you can still play online for free include Raft Wars, Infectonator, Sift Heads, the Ducklife series, Age of War and Cover Orange.